Showing posts from July, 2013
Show All

"I Think, Therefore I Play" -- English edition of Pirlo autobiography to be published next spring 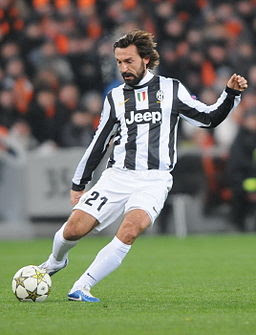 Andrea Pirlo's best-selling autobiography, Penso Quindi Gioco   ( I Think, Therefore I Play ) is to be published in English in the spring of next year. Andrea Pirlo in action for Juventus Global English language rights for the Italy and Juventus footballer's story have been acquired by BackPage Press, the UK publisher whose recent titles include Barca: The Making of the Greatest Team in the World and the popular Football Manager Stole My Life.  Pirlo has been an increasingly significant player in the Italian national team in the later stage of his career.  His range of passing skills and his proficiency as a free kick specialist have won him many admirers in a country where the playmakers are held in special reverence.  He is not in the class of a Gianni Rivera or a Roberto Baggio but his outstanding contribution to Italy’s run to the final of Euro 2012 confirmed his place among the best midfielders of his generation. He never lacked quality. In a career that has s
Post a Comment
Read more

The Real Jeeves: The Cricketer Who Gave His Life for His Country and His Name to a Legend , by Brian Halford By conservative estimates, the Battle of the Somme claimed the lives of more than one million soldiers, to be remembered as one of the great tactical mistakes in the history of warfare, its name becoming a byword for pointless, indiscriminate slaughter. Among them was a cricketer whose name would become famous, not for anything that happened in the horror of the trenches but because of a fictional character in a series of comic novels that are still read - and indeed adapted for stage and television -- to this day. Jeeves was the name chosen for the valet devised by the author P G Wodehouse to act as a foil for his comic lead, Bertie Wooster, in a series of novels and short stories, making his first appearance (without meeting Wooster, as it happens) in Extricating Young Gussie, which was published in the United States in September 1915 in The Saturday Evening Post. W
Post a Comment
Read more
More posts