Showing posts from January, 2011
Show All

Newspaper writers are an underrated breed.  Where the polished prose of a literary novelist might correctly be applauded, chances are it has been rewritten, rewritten and rewritten again before it was allowed anywhere near a publisher, whose editors will then have subjected it to their own revisions. By contrast, the newspaper journalist generally files his (or her) first draft, which may have been tinkered with a little if there was time but essentially is the product of unprocessed thoughts, transferred from mind to screen in the time it takes to hit the relevant keys. It should be seen as remarkable, then, that the serious newspapers -- and some deemed as less so -- offer much writing of extraordinary quality.  The sports pages, moreover, should not be regarded as an exception.  James Lawton, Hugh McIlvanney, Simon Barnes, Martin Samuel, Paul Hayward, Richard Williams…these names make an incomplete list. It excludes, for example, Gideon Haigh, the Australian journalist who is wi
Post a Comment
Read more

Publishers looking to Anderson too... 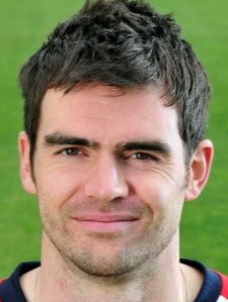 James Anderson If England’s cricket team are looking forward to welcoming a refreshed fast bowler back into their dressing room when James Anderson rejoins them in Australia for tomorrow’s fourth one-day international, publishers Simon and Schuster will also be hoping the Lancashire player can inspire a change of fortune for Andrew Strauss’s side.   They have committed themselves to making the 28-year-old a £100,000 advance to publish his biography later this year, having gambled on their man emerging as one of the stars in an historic Ashes triumph by buying the rights on Christmas Eve, with the series then all square at 1-1. Their judgment looked sound as England won the last two Tests by an innings, Anderson wrapping up his own brilliant series with seven wickets in the concluding match in Sydney. Anderson managed to fly home between the second and third Tests to attend the birth of his second child and it seemed only fair when the England management rewarded his part in th
Post a Comment
Read more

‘How to’ books regularly enjoy a New Year surge in popularity as resolutions focus on self-improvement.  Paul Merson, the former England and Arsenal footballer, is bucking the trend, however, with a ‘How NOT to’. The 42-year-old, who also had four years at Aston Villa, is a self-confessed addict on three counts, having succumbed to the temptations of drink, drugs and gambling during his career as a high-earning player. He admitted to being hooked on alcohol and cocaine in 1994, while supposedly at his peak at Arsenal, and spent time in a clinic in Arizona a decade later in his battle to control his gambling.  Although he once commanded wages of £35,000-a-week as a player, much of his wealth ended up in the bank accounts of bookmakers. He is uniquely placed, therefore, to advise today’s generation of pampered young superstars wondering which indulgence they might try next to fill the hours of boredom between training sessions.  Merson has written about his problems before, his Rock
Post a Comment
Read more

New take on the Higgins legend

It is more than 20 years since Alex Higgins took part in his last World Snooker Championships and yet still there is no player to whom the popularity of that tournament -- and the game in general -- owes a greater legacy. His flamboyant playing style and his chaotic life away from the table were the perfect combination as the sport sought to move away from dingy clubs into the nation’s front rooms in the latter half of the 1970s, when television viewers and tabloid newspaper readers developed a taste for sport laced with soap opera. He gave the game its blueprint for success, encouraging countless young men not only to strive for brilliance with a cue but to live a little on the wild side, too, perhaps. There have been better players (though it should not be forgotten that he won the world title twice) but no bigger character, no one to command the attention of the public in the same way, whether for his extraordinary skills or his volatile temperament. Higgins destroyed himse
Post a Comment
Read more

Cricket journalist and author Lawrence Booth has been appointed to succeed Scyld Berry as editor of Wisden Cricketers’ Almanack, traditionally one of the most prestigious jobs in cricket. Booth, 35, will become the youngest Wisden editor in 72 years. Berry, editor since 2008, is set to declare after his fourth almanack – the 148th edition – is published in April. Booth will take charge of the 2012 edition. Wisden, the game’s yellow-jacketed bible, has been at the heart of cricket since it was first published in 1864.  Selection as one of its Five Cricketers of the Year has become recognised as a major honour and the annual Notes by the Editor have long been regarded as a uniquely influential voice on the state of the game. Booth, cricket writer for the Daily Mail, studied modern languages at Cambridge and has been associated with Wisden since he sought work experience there in 1998. Quickly identified as a writer of talent, he subsequently worked for the almanack, Wisden Cricket M
Post a Comment
Read more

The appetite among sports books fans for more tales of Leeds United shows no sign of being satisfied. At least six notable additions to the biggest single-club genre after Manchester United appeared during 2010.  The failure of Anthony Clavane’s excellent Promised Land, a superb personal history of the Elland Road club, to make the William Hill prize contenders suggested the appeal of the subject might be in decline but the chart of the year’s best-sellers contradicts that theory. Trailing behind only Kenny Dalglish’s latest memoirs and Patrick Barclay’s biography of Sir Alex Ferguson is the life story of the former Leeds midfield supremo, Johnny Giles. Giles, of course, was the lynchpin of the Don Revie team that continues to divide opinion and which by doing so has kept interest alive for so long.  The little Irishman who partnered Billy Bremner in the ‘engine room’ of the Leeds team at its peak himself has had to live with two reputations, remembered by some as one of the fin
Post a Comment
Read more
More posts