The winner is announced

Surfing memoir Barbarian Days, described as “compelling, elegiac and profound” by the chair of the judging panel, has won the 2016 William Hill Sports Book of the Year Award for American author William Finnegan.

The book, which has already won a Pulitzer Prize for the veteran New Yorker magazine writer, tells the story of Finnegan life through the prism of his 50-year obsession with surfing, from his childhood days in California and Hawaii to the present day.

Barbarian Days beat a particularly strong field to land the £28,000 cash prize that goes with the award, which also comes with a leather-bound commemorative copy of the book, a £2,500 free bet with the sponsors and a day at the races.

Finnegan's work was chosen from a shortlist that judges' chair and co-founder of the award Graham Sharpe dubbed "a ‘Magnificent Seven’ of sporting books".

But it was Barbarian Days that impressed the judges the most.  In some ways a controversial inclusion on the shortlist, in that there is no element of competition either with other surfers or the record books, it won them over for the sheer brilliance of Finnegan's prose and the sharpness of his insights as he pursues a compelling quest to find the finest surf on the planet.

Broadcaster John Inverdale, who presented Finnegan with the award at a ceremony at BAFTA in central London, said that the decision of the judges had been unanimous.

"If you read it with an open mind, you will realise what an amazing thing life is and having some kind of engagement and passion for sport enables you to live life to the full.”

Another judge, the journalist and broadcaster Mark Lawson, endorsed Inverdale's words, although he admitted that some on the panel had needed to be convinced that surfing should be considered as a sport.

"Although the author himself acknowledges the scepticism of some about whether surfing is a sport, the judges felt that Finnegan's account of the physical and psychological drive to achieve athletic perfection make Barbarian Days a worthy winner of the award.

"The autobiographical detail and precision of the writing also make it rewarding to those who might think they would struggle to get on board with surfing as a subject."

Finnegan, who now lives in Manhattan yet still surfs regularly off Long Island, has been a staff writer at the New Yorker magazine for nearly 30 years, often travelling to conflict zones and his previous books reflect that.

Two have been rooted in his experiences in South Africa in the days of apartheid, another is about conflict in Mozambique and his most recent, Cold New World, shines a light into the bleak lives of disadvantaged American teenagers growing up hopeless and desperate in their own country.

Veteran William Hill spokesman Graham Sharpe, who co-founded the award with the late John Gaustad, said of the winning entry: “Compelling, elegiac and profound throughout, Barbarian Days offers a revelatory and often dramatic study of the elegant art of surfing. As we follow William Finnegan’s story we see not just the maturing of a boy into a man, but of a rebellious soul coming to terms with society on his own terms.

"We also see, as we so often do, how sport reflects politics, economics and an ever-shrinking world, as surfers fight to protect their hidden beaches and continue their search for new waves to master.

"It’s a widescreen, technicolour winner. With a Pulitzer Prize and now the Bookie Prize to its name, surely Hollywood cannot be far behind.”

Read reviews of all the shortlisted titles:


Mister: The Men Who Taught the World How to Beat England at Their Own Game, by Rory Smith (Simon & Schuster), £18.99 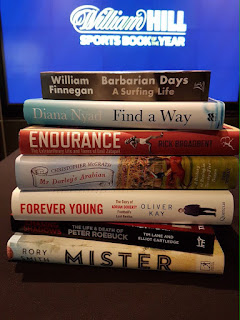 Find a Way: One Untamed and Courageous Life, by Diana Nyad (Macmillan)

William Hill Sports Book of the Year 2016: the longlist in full

Leave a comment or submit your own sports book review