Wagh of words turns to the law

When batsman Mark Wagh recorded his thoughts in a diary of the 2008 English cricket season (Pavilion to Crease... and Back

; Fairfield Books), it looked like the army of ex-players occupying Press Boxes around the country would be swelled by another recruit before much longer.

Wagh’s honest and well-written account of a season with his county, Nottinghamshire, was spoken of in the same breath as previously acclaimed work by Jonathan Agnew, Ed Smith and Simon Hughes, all of whom have gone on to establish careers in the media or, in the case of Smith, write a number of books.

But when, after scoring nearly 12,000 first-class runs, Wagh puts his bat away for good next summer it will be for a career in the law rather than journalism.

“I did think about journalism because I do enjoy writing,” Wagh said.

“But while I enjoy playing cricket I’m not a great watcher and I wondered if it might be a bit of a lonely existence, with just a laptop for company a lot of the time.

“I also looked at the diminishing number of column inches being given to cricket in the newspapers these days and wondered whether it was really a career with a future.

“If I buy a paper it is usually The Times but there have been occasions this summer when there has been a really interesting day in the domestic programme and I’ve bought the paper the next day to find not a word about it.”

Instead, the 33-year-old former Warwickshire player, the elegance of whose batting has drawn comparisons with the best when at the top of his game, has been studying hard to obtain the necessary qualifications before starting a training contract with the London commercial law firm Freshfields in February 2012.

“I’ve been thinking for a while about what I would do when I stopped playing and while I may miss cricket -- I will not know until I’ve finished -- I’m excited about taking on a new challenge,” he said.

From Pavilion to Crease was praised for being a frank and candid description of life as a professional cricketer that did not attempt to sugar-coat the lifestyle and challenged conventional stereotypes. 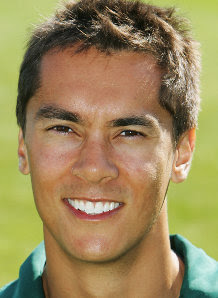 “I feel that there is a lot of rubbish written,” he said. “There is a degree to which certain things are trotted out as if they were true, when to my mind they aren‘t.

“For instance, this idea that you have to have a positive mindset to score runs.  I’ve never felt that to be true.  There are times I have turned up feeling as though there is absolutely no chance of scoring runs and I’ve scored runs.  Other times I have felt absolutely perfect and not scored one.

“That’s just one example and there are lots of others.  So I just wanted to record what I felt each day and give a realistic representation of what happens during a cricket season.”

An Oxford graduate in psychology, Wagh is by nature a student of human behaviour and the diary -- inevitably, it seems -- drew him into a period of self-analysis.

“Writing it changed me as a person,” he said.  “Diaries make you introspective by definition and possibly I became too introspective and, almost from a reaction to writing a diary and the fact that I’m retiring,  I feel I’m a lot less caught up in things and a lot more accepting now.

“The writing was almost cathartic in that having got a lot of the stuff out I’m now cleansed, as it were.”

Does he have another book in him?  “Perhaps.  I enjoyed the process of writing but the hours I spent writing I have since spent studying and there has not been time so far.  Maybe in the future…”

Follow the link to buy: Pavilion to Crease... and Back