Andrew Collomosse was a 13-year-old schoolboy when Yorkshire won cricket's County Championship in 1959, breaking a Surrey stranglehold on the competition that had kept the championship pennant flying at The Oval for seven consecutive seasons.

It was Yorkshire's first title since 1946 and marked the beginning of a golden era in Yorkshire cricket. Over the next decade, the side captained initially by Ronnie Burnet, then Vic Wilson and, from 1963 onwards, by Brian Close, would win seven championships of their own, as well as the Gillette Cup twice.

Collomosse grew up in awe of the likes of Close, Fred Trueman, Ray Illingworth, John Hampshire, Philip Sharpe and Jimmy Binks.  They and the other members of that all-conquering Yorkshire team were his boyhood heroes, their names every bit as magical as Andrew Flintoff or Kevin Pieterson or Stuart Broad might be in the minds of today's generation of cricket-loving youngsters.

By 1969, Collomosse was earning his living as a journalist and had the privilege of witnessing the victory over Derbyshire in the Gillette final at Lord's as a reporter for the Wakefield Express, an occasion marred only by having to leave halfway through to cover Huddersfield Town's match against Queen's Park Rangers at Loftus Road.

Collomosse went on to work for the Daily Express and has furthered his reputation as a football and cricket writer since going freelance 21 years ago, covering hundreds of matches for numerous publications. 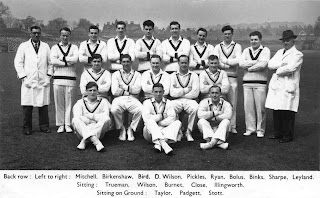 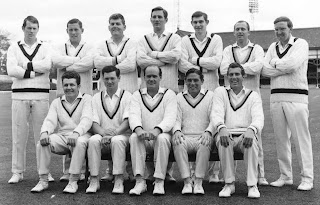 The pictures show the 1959 team (above), which included Dickie Bird (3rd left, back row) and the 1969 line-up (below), from which Illingworth, Trueman and Taylor had gone. In the 1969 picture are (back row, from left) Balderstone, Hampshire, Nicholson, Hutton, Chris Old, Boycott, Cope.(front) Sharpe, Binks, Close, Padgett, Don Wilson.
That Yorkshire team of the 1960s made such an impression as Collomosse grew up he decided to track down the surviving members to bring fresh colour to his own memories and to hear their take on those glorious years.

He put together the material he gathered in a new book entitled Magnificent Seven: Yorkshire's Championship Years to be published in June by Great Northern Books.

"Sadly, Burnet, Trueman and Vic Wilson, along with Chris Balderstone and Tony Nicholson, are no longer with us but of the survivors, with the exception of Geoffrey Boycott, all agreed to share their recollections with me," Collomosse told The Sports Bookshelf.

"Without exception they went out of their way to be as helpful as they could and I was touched by their hospitality and friendship.

"What struck me throughout the series of interviews is that they seemed genuinely unaware of the iconic status they held among so many Yorkshire supporters."

By their association with the Yorkshire Players' Association, opening batsman Bryan Stott and off-spinner Geoff Cope helped Collomosse locate the other members of the team.

Brian Bolus and Ken Taylor have 'defected' to Nottingham and Norfolk respectively, although they remain a lot closer to God's Own County than wicketkeeper Binks, who is enjoying his autumnal years in Sacramento, California.

"Jimmy worked for a hydraulics company in Hull but became disillusioned with living in Britain in the 1970s," Collomosse explained. "When when the chance came to work in the same line of business in America, he took it, moving to Iowa at first and then southern California."

Each year is seen through the eyes of one player or two in tandem, from Stott in 1959 to Sharpe in 1969, with Illingworth and Close offering an overview in the foreword and afterword.

Collomosse, who currently writes on cricket for Wisden Cricket Monthly and the Daily Telegraph, has a literary pedigree as a ghost writer, notably penning autobiographies on behalf of Jimmy Armfield and Nat Lofthouse.  Magnificent Seven is his eighth book but the first with only his name on the cover.

For more books by Andrew Collomosse and more on cricket and football, visit The Sports Bookshelf Shop.